It all began when I came across Series, a new kind of publishing format on the online platform for writers, Medium.com where readers could follow an author’s work as s/he added to it, little by little. And then they can applaud as many times as they wish to show appreciation for the work. In order to know when new stuff is being added, all readers have to do is sign up for updates. The format seemed fun and I was interested in using it to raise awareness for a serious cause – the cutting down of thousands of trees in my city, Bombay, even as you read this.

But I had to know how effective this format would be as a vehicle to deliver the message so people could galvanize into swift action against corrupt officials and a short-sighted government.

I was already publishing on Medium quite often and pleasantly surprised at its reach. I was looking forward to trying out the Series format but I wanted to do a short trial first.
What better way to start than with something I cared about and could expound on endlessly, even in my sleep: my little kitten.

Laurie’s a rescue kitty who I adopted just under a year ago, and he’s brought much joy, laughter and much-needed nonsense into my life. I wholeheartedly support rescue and stray animal adoptions. While I may shout myself hoarse from the rooftops and write endless articles about how animals are such wonderful companions except that we’re being cruel when we encourage breeders and buy from pet shops. A simple sharing of my own story might be a more meaningful and hopefully impactful exercise.

Plus, I was missing him terribly since I’m visiting my family in the US. Although he’s being cared for excellently in Bombay with no dearth of feline companionship (he has my older cat for company and they are boisterous playmates) or human attention (I craved his cuteness and was yearning to hear his silly little voice and squish him). This was my way of making up for his absence and in a strange way, wanting to capture the fact that he is in my thoughts every single day that I am away.

People have strange ways of communicating their affection to their loved ones and I know Laurie couldn’t give a tiny rat’s ass about love letters and the sort. He’d much rather have me make him an endless supply of paper balls to play with, scratch his chin whenever he demands it…

Laurie, like most kitties, loves a good chin rub. I love how he indicates where I should focus depending on what feels good for him. So uncharacteristically cooperative of any feline. #furbabies #catsofinstagram #catlover #chin #kitty #pampered

… and of course, take him on his leash to the garden for ‘intrepid explorification’ as often and for as long as possible.

So little Laurie has begun going on little walks in the garden late evening for short durations. Today was the longest at almost 40+ minutes. Eager to sniff everything and a bit easily startled initially, he's started to feel bolder and calmer now after a couple of trips in the last few days. Never imagined I'd have a kitty outdoors on a leash but hey, life's full of happy surprises. #adoptdontshop #catonaleash #catsoninstagram #furbaby #gingercat #ilovecats #leash #thethingswedoforlove #outdoors

If in reading my ‘Love letters to Laurie’, even one single person is motivated to help or actually adopt a rescue cat, my work here is done.

I’m sharing excerpts from the Series, but I do hope readers check out the actual thing available on the Medium app. 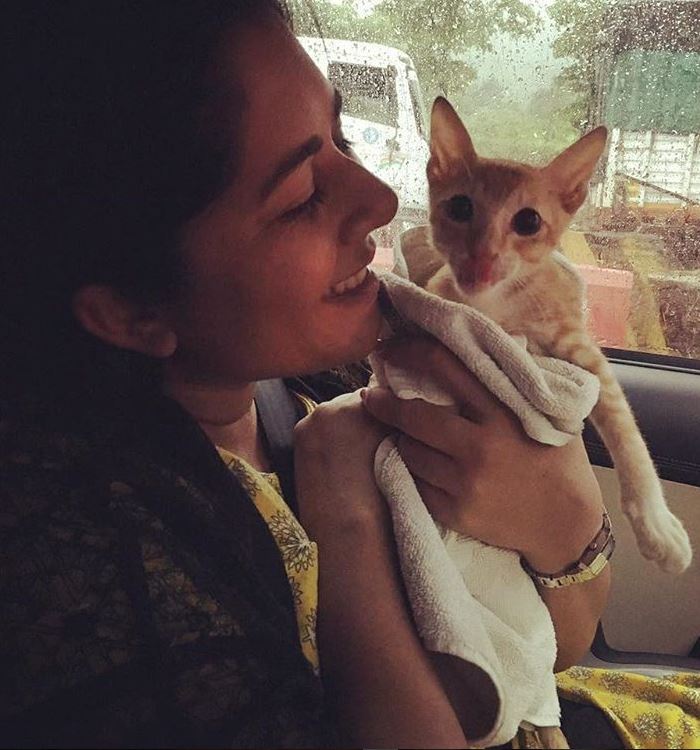 “You were so darn tiny when I first got my hands on you! Wrapped in a towel for your first road trip ever, in a car sans carrier, you looked like a little purrito, I could have eaten you in one single bite.

And oh, how adorable you were…winning over cat haters and cat lovers in the same day, with nothing more than a few meows, plaintive and strident at the same time. You were destined to be a cat with an active social life. I shoulda known right away back then.

I couldn’t believe I had the good fortune to foster you. I thought I’d brought home a little bundle of joy for just a few weeks, and that it would be a short but sweet little encounter of the furry kind.

Boy, was I wrong or what. Both fate and your impish charm worked their magic on me and before I knew it, I was truly, madly, deeply in love with you (Apologies to all Savage Garden fans).

I just couldn’t wrap my head around the fact that I was your 11th foster home. And that despite all your foster moms and dads claiming they loved you to bits, they could NOT offer you a furever home. How could anyone NOT want you? I mean it was YOU!

You insanely energetic and annoyingly adorable orange monkey, YOU!”

Read the next letter in the following post. To view the entire series, visit Love letters to Laurie.

(Guest writer Simona Terron is a media and branding consultant and co-founder of The Bicycle Project. Follow her updates on Twitter and Linkedin

6 thoughts on “Guest post: Why I started writing love letters to a kitten”