Noticed the satisfaction on the faces of all those beefy tyre-flipping, battle rope-whipping, kipping and deadlifting Crossfit athletes on Instagram? They aren’t killing themselves with burpees-till-failure. They are lovin’ it. And you might too, if:

Despite the best intentions, turning up is the hardest part of exercising because — admit it — things get mundane after a while.

Crossfitters aren’t freaks out to prove something. Crossfit is a sport that mixes things up. Its WODs (Workouts Of the Day) change every day to train a different aspect of your physical aptitude. All CrossFit workouts are based on functional movements, and these movements reflect the best aspects of gymnastics, weightlifting, running, rowing and other core movements of life.

What is Crossfit about?

Crossfit started out as just one gym in California, but quickly expanded to become a global fitness phenomenon. These gyms are called “boxes” by Crossfitters. The fitness sport promotes all-round proficiency. Fitness is no longer measured by how many kilos you can lift or how many kilometres you can run. Crossfit athletes are able to complete a half marathon, as flexible as gymnasts, have explosive power and can compete in the weight room too.

Think of it as constantly varied functional movements performed at high intensity. It has a mix of gymnastics, strength training, functional training and conditioning, all presented in diverse formats. The goal is to ensure athletes are exposed to a wide array of movements and loads. The aim is to develop competency in the 10 domains: endurance (both cardiovascular and respiratory), speed, balance, coordination, agility, endurance, stamina, strength, flexibility, power and accuracy.

Crossfit is so successful, it’s considered credible by fitness industry experts, military organisations and law enforcement agencies the world over.

I have started incorporating Crossfit drills on the days I’m doing bodyweight exercises. It feels good getting the wind knocked out of you after completing a drill (trust me). One of my personal heroes, Christmas Abbott went from bad habits to being badass because of Crossfit. In fact, her books also have the word “badass” on them. 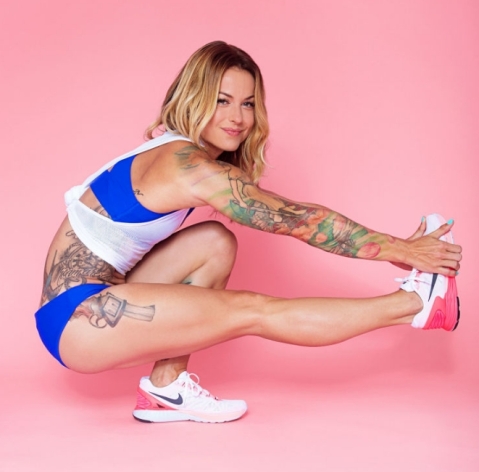 From a 22-year-old chain-smoking alcoholic and dabbler in hard drugs into a 35-year-old fitness guru who owns CrossFit gyms, can lay claim to being the only woman to ever work on a NASCAR pit crew, and was a finalist on the show Big Brother, Christmas has come a long way. She’s a certified Crossfit instructor and mentor to female Crossfitters.

She says in an interview:

“A friend showed me a CrossFit video called Nasty Girls, and at the end of it, the girl—Nicole Carroll, who is now my boss—started crying. It was so intense and it was like an epiphany for me. I wanted to do something so amazing that it just made me cry.” Because she didn’t have internet access, Christmas began creating her own variations of the programme and watching Crossfit videos whenever she had the chance.

Your needs and the pro-athlete’s differ by degree not kind, according to Crossfit creator Greg Glassman. “Of course, we cannot load your grandmom with the same squatting weight that we would assign a skier, but they both need to squat,” he says. Squatting is just one example of an exercise that is universally essential yet rarely taught to anyone but the most advanced athletes. The beauty of Crossfit is that it includes advanced movements and activities in the WODs that you might not even learn at the gym.

How to get started

The best way to get your form right for the WODs is to join a Crossfit class in your neighbourhood. Once you have perfect form, continue doing WOD with your regular workout at home or in the gym. CrossFit.com publishes the WOD daily (in the WOD section). Follow the Exercises and Demos page to learn the movements.

Don’t go all out at the start. CrossFit.com workouts are extremely demanding. Take each WOD cautiously and try completing the workouts comfortably and consistently before throwing yourself at them. For best results, scale the workouts down to establish competency before racking up the intensity. Adjust the length, reps, loads and distances according to your level of pain and comfort.

(A version of this post was published in the newspaper, Mid Day)

3 thoughts on “Flex Friday: Crossfit is the badass of fitness sports”